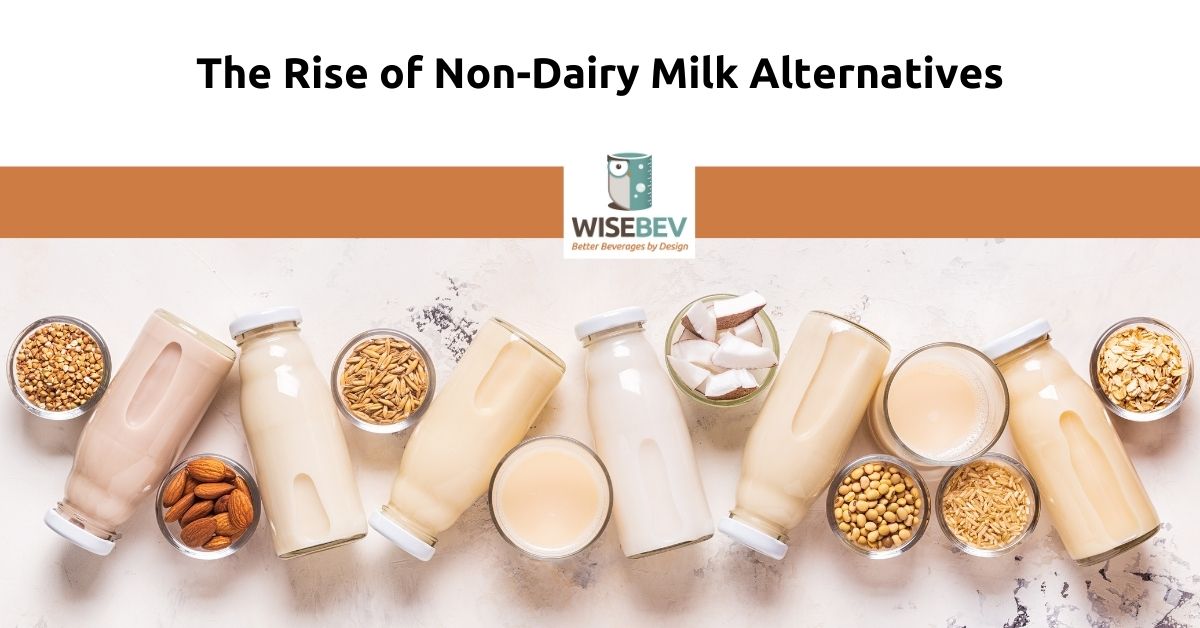 Next time you’re at your favorite coffee shop, take a look at the latte options. How many options do you see with non-dairy milk alternatives?

Lattes are no longer just lattes – they are pistachio lattes, oat milk lattes, pea milk lattes, and more. These “milks,” also known as plant-based milks, are non-dairy beverages made from a water-based extract of crops like soy, oat, rice, and almonds.

What makes plant-based cow milk alternatives more appealing? There are several factors contributing to the growing menu at your local coffee shop.

Some people choose to exclude animal products from their diets for ethical or health reasons. Other people are concerned about the potential contaminants in cow’s milk, such as antibiotics, pesticides, and hormones, and they’re ideal for the 75% of the world’s population that is lactose intolerant.

As consumers have made the shift to non-dairy milk alternatives, they are shopping for milk with a specific function that fits into their lifestyle. Today we have a broad variety to choose from, each with unique properties and flavors. Here we’ll discuss some of the top milk alternatives and some of the qualities you can expect to find in each.

Oat milk is naturally sweet and mild in flavor, with a consistency similar to 1% or skim milk. It’s made from oat groats (oats that have been cleaned, toasted, and hulled), water, and potentially other grains and beans.

Oats are high in protein and fiber, and even have properties that reduce stress. It’s one of the options closest to dairy in terms of texture and taste, and it even froths well so it’s a great addition to your morning coffee. It tastes great with cereal or in smoothies and can be used in recipes like cow’s milk.

Almond milk is made from ground almonds and water. It has a light texture and a slightly sweet and nutty flavor. Almond milk can be mixed into a smoothie, or used as a substitute for cow’s milk in desserts and baked goods.

It’s not viewed as the best alternative milk to add to coffee, however, as it can turn bitter. It also has a higher fat content compared to other plant-based milk so it froths similarly to dairy milk.

Pea milk sounds a bit strange, but it’s catching on as one of the newer non-dairy beverages available. Made from yellow field peas (not the green peas you are used to seeing!) its taste and consistency are very close to cow’s milk, but perhaps a bit smoother and creamier with an earthy flavor.

Peas have a high protein content and numerous nutritional benefits, which makes pea milk a popular milk alternative. It adds a rich, thick texture to coffee and smoothies, and serves as a good dairy milk substitute in oatmeal and cereals. It’s also vegan, nut-free, soy-free, lactose-free, gluten-free, and carries a much lower water footprint than almond milk and a much smaller carbon footprint than cow’s milk

Soy milk is the original alternative to cow’s milk and also is likely the least processed out of all plant-based milk. It is the only plant-based milk that comes close to offering a protein content comparable to dairy.

Made with either soybeans or soy protein isolate, it often contains thickeners and vegetable oils to improve taste and consistency (most milk alternatives do). It typically has a mild and creamy flavor, however, the taste varies between brands. Soy milk froths up well due to its higher protein content, making it a good complement to coffee.

Hemp milk is made from the hulled seeds of the industrial hemp plant, which includes varieties of Cannabis sativa that are low in the psychotropic substance tetrahydrocannabinol (THC).

Hemp milk has a slightly sweet, earthier taste and a thin, watery texture. It’s similar to soy milk in terms of consistency but is even creamier. It’s similar to almond milk in terms of flavor, making it a good combination of the two that delivers a whole host of nutrients. Hemp milk works best as a substitute for a lighter milk such as skim milk.

Rice milk is made from milled white or brown rice and water and is mild in taste and naturally sweet in flavor. This milk has a lower fat and protein content than nut or coconut milk, so while this means it doesn’t froth up as well this also means its taste is less overpowering.

Rice milk has a slightly watery consistency and is great to drink on its own, in smoothies, desserts, or oatmeal. As far as a pairing with coffee, even if you add quite a bit of rice milk to your coffee, you’ll barely notice it.

Made from filtered water and coconut cream, coconut milk has a creamy texture and a sweet but subtle coconut flavor. It’s often referred to as “coconut beverage” as it’s more diluted than canned coconut milk. Due to coconut milk’s high-fat content, it is able to froth similar to cow’s milk.

Quinoa milk is slightly sweet and nutty and has a distinct quinoa flavor. Made from water and quinoa, an edible seed that is commonly prepared and consumed as a grain, it’s a rich source of protein and contains all nine essential amino acids. Given its distinct flavor, quinoa milk works best poured onto cereal and in warm porridge or oatmeal.

Cashew milk is made from a mixture of water-soaked cashew nuts, or cashew butter, and water. It is rich and has a creamy texture, and has a sweet and bit more subtle nutty flavor than almond milk. It’s a creamier alternative to almond milk and is great for thickening smoothies, as a creamer in coffee, added to your morning cereal, and as a substitute for cow’s milk in desserts.

Dairy milk consumption has been on the decline for decades, with each generation drinking less milk. The non-dairy alternative milk market continues to rise with more and more milk alternatives being added to the mix. Just as consumers may need to try different milk alternatives to determine which is best for their milk consuming habits, entrepreneurs and beverage developers need to be aware of the functionality of each milk alternative.

In beverage development, it is crucial to know how a milk alternative will work with other ingredients, the nutritional impact, and how they’re best consumed to meet the drinking habits of consumers. If you’re developing a beverage and looking to understand the functionality and formulation of milk alternatives, contact our team of food scientists today and schedule a free consultation. We’ll help you to find the perfect milk alternative for your beverage formulation!